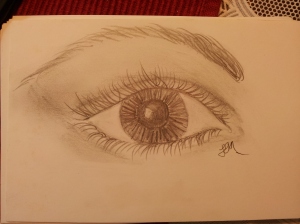 The Point of View (POV) in Literature is the perspective the author chooses to tell their story. The story unfolds through narration. Narration is the use of a written or spoken commentary to convey a story to the intended audience.

Narration is how the author presents their story, including:

A narrator is a personal character or a non-personal voice that the creator of the story uses to convey information to the audience, particularly about the plot. The narrator may be a voice devised by the author as an anonymous or stand-alone entity; as the author themselves; or as a character within their own story. Narrative point of view or narrative perspective describes the position of the narrator in relation to the story being told. When you are reading a scene in a book and when you are writing a scene, you follow the character almost like a camera on the character’s shoulder or in the character’s head. You are looking at the character performing a specific set of actions or important actions in vivid detail.

There are 3 major kinds of POV. Within these there are variations.  Examples of point of view belong to one of these three major kinds:

Authors use POV to express effectively what they want to convey to readers.  It is the vehicle to convey  the character’s feelings, emotions, and actions.

In the first-person narrative, the narration is told from the character’s perspective. The story unfolds through the eyes of the character. This is often used to convey directly the deep internal, otherwise unspoken thoughts of the character.  The story unfolds using “I”, and “we”.  Most often, the story is told from the protagonist, expressing their views to the reader but not to the other characters. This is often a skewed view, causing the reader to sympathize with the protagonist or other character and rally their cause.  Using first person may show a story within a story, or allow the reader to observe the pursuit of some hidden agenda.

The first-person narrator is always told from one of the characters in the story, whether it is the main character or some other character. In some cases, the narrator gives or withholds information based on their own experience often as it unfolds.

To Kill a Mockingbird by Harper Lee; Dragon Tears by Dean Koontz; Dune by Frank Herbert; The Catcher In the Rye by J.D. Salinger; I Am Legend by Richard Matheson; The Sun Also Rises by Ernest Hemingway

Talented writers often choose to skew their narratives to the character’s bent, to an arbitrary degree, in keeping with the narrator’s character from just a smidge to extreme depending on the character’s bent. Unstable or malevolent narrators can lie and deliberately mislead the reader.

Novice writers might make the mistake of allowing elements of omniscience into a first-person narrative unintentionally and forgetting the limitations of inherent humanness of a character’s involvement.

Writing in first person is intimate, but it is also confining. You cannot explore the feelings or motivations of other characters; your viewpoint character can only guess what they are. You cannot show anything from another character’s perspective.  The entirety is experienced through the one character’s view, which makes the novice want to do head hopping which is strongly discouraged.

The second-person narrative mode, in which the narrator refers to him- or herself as ‘you’ in a way that suggests alienation from the events described, or emotional/ironic distance, is less common in fiction. This is often the voice that I use when writing my blog posts.  I refer to you the reader and tell things from my perspective. My blog being nonfiction, the second person works well.

Bright lights, Big City by Jay McInerney; An Italian Affiar by Laura Fraser; To Be or Not to Be: A Choosable-Path Adventure by Ryan North/William Shakespeare; If on a Winter’s Night a Traveller by Italo Cavino

The third-person modes are usually categorized along two axis. The first is the subjectivity/objectivity axis, with “subjective” describing one or more character’s feelings and thoughts, and “objective” not describing the feelings or thoughts of any characters.

The second axis is the omniscient/limited axis, a distinction that refers to the knowledge available to the narrator. An omniscient narrator has knowledge of all times, people, places, and events, including all characters’ thoughts. The trick here is the narrator cannot describe  or reveal things unknown to the focal character until they discover them.

How Do You Decide?

Think about your characters in terms of Whose story is this? The answer to this question will lead you to your point-of- view character.

If you’re not sure whose story it is, ask the following questions:

When you’ve decided whose story you’re telling, that character will usually be your viewpoint character, the one who lets the reader know what’s going on.  If you are still unsure, read and experiment.  Play around with it.  Write a scene using different POV’s. Share them with your writing group.  Discuss which one works better and why.  Sometimes the logical choice doesn’t flow as well as the less obvious choice. Do what works for you and your story.

Do you have a particular style you enjoy reading? Do you prefer to write in a specific pov? Think about your favorite books or authors, what POV did they use?

3 comments on “What’s Your Perspective?”