My guest today is the delightful Belinda Burke. I get the privilege of sharing with you the cover reveal for her newest work:

a little teaser to pique your interest.

Blurb: In the wake of Dealla’s latest atrocity, Macsen has learned a lesson he will never forget. To love is to fear, and he intends to make sure that his fear never comes to pass. Bran is less than pleased with being left behind while Macsen hunts Dealla out, but he has trouble of his own to distract him. An unknown ability is growing in him, magic that has nothing of Summer in it. Disturbed, Bran convinces Macsen to come with him to question his mother. Only she knows who Bran’s father is, and the secret half of his bloodline is the most likely source of his new power.

Elenn agrees to Bran’s request, but for her own reasons. Faelan, one of the gancanagh, is to be Bran’s guide to his father, and she has ordered him to seduce the Red King and prove his love false. Faelan has no desire to follow through, but also no choice. His queen has commanded, and he must obey.

Macsen and Bran aren’t the only lovers whose feelings are being put to the test. After five thousand years of separation, Myrddin has no choice but to accept Kas’ help in restoring the spring and its rite to the mortal world. The difficulty is that he wants Kas to desire him for himself, not out of necessity, and the whole of reality is standing in his way.

Where is the line that divides determination from desire? Love is power – but is it enough?

I love all things medieval  and Arthurian tales are one of my favorite indulgences. 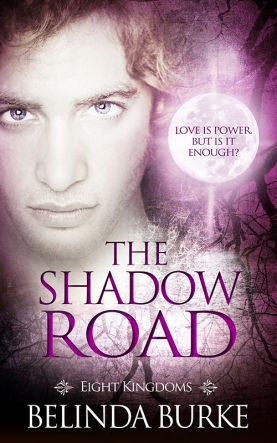 The Red King’s arrival made the mortal night rich with shadow. It was only a few weeks past Samhain, but there had been no slow descent through autumn to the sleeping season—not this year. This year, the leaves had barely turned when the snow had begun to fall. Now, the Red King stalked the layer of fresh, new whiteness as a blood-tinted wolf who left no prints behind him.

Macsen had gained a name as an omen of death where his own wasn’t known, ran wild across the night and hid from nothing, not even the sunlight. It grew dimmer and grayer as the winter intensified and the snow continued to fall. Despite that, there were humans everywhere, long trains of people moving from one side of the island to the other, seeking a safe place, a haven. There were a thousand lives he could have had as prey at any time, not just mortals but immortals, beings and beasts both in their myriad kinds.

He had only one victim in mind.

Where are you, woman? Dealla, where is it you are hiding?

He named her in his thoughts, named her with the wild howl of the wolf as he climbed from one hill, one mountain, one valley to another. The smell of her was strongest in her palace, a stink of witch-magic that he knew well, but the woman herself wasn’t there. The cold of the scent told Macsen that she hadn’t been there for some time. More than that, there was silence in the whole fortress, an empty silence. There were no guards, no servants, no waiting huntresses in the circles of the walls.

Wherever the woman had gone, she had taken the activity that surrounded her along, and had left no sign of when or if she intended to return.

Author Bio: Belinda is an author, storyteller, and poet – property of one cat, perpetual insomniac, and resident of the New England coast of the United States. In her spare time she reads anything she can get her hands on and spends far too much time writing!

She is currently writing for Totally Bound’s new imprint, Pride Publishing, and fulfilling her primary dream of authoring her own books. She welcomes reviews, comments, critique, suggestions and even just friendly messages with no purpose, so don’t be shy!

You can find a guide to her series’, new releases, and upcoming works at her website, along with special excerpts available nowhere else! Visit www.belindaburke.com.

Book One of the Eight Kingdoms series: getBook.at/Dark-Side-Of-The-Sun

Thank you Belinda for allowing me to share this cover reveal!  I wish you  great success!

Thanks to my readers – write on my friends, write on!