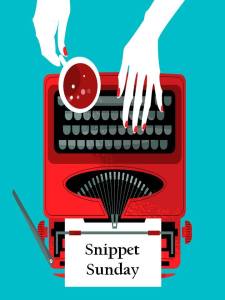 Last week I took a break from the snippets simply because I was drowning in my to-do list. OK, that and we had company.  It was nice to unplug  and make progress on other goals.

I won’t waste a lot of time  jabbering on about what I did.  I know that’s now why you are here.  Who clicks on a link that says snippet if they aren’t planning to read a snippet, right?  So let’s get right to it.

Leading to a critical moment:

Helena grabbed the rifle and handgun and set them both in the small cage of the four-wheeler and took off in a rush. The tires spat gravel as she gunned the engine. She spun to a stop, taking her flashlight from her belt.

Where was he? She shone her light in the direction of the tunnel and two coyotes scurried away. She strapped the gun over her shoulder, tucking the handgun into its place on her belt. “I’m not in the mood to be playing games with saboteurs.”

She rang Scott, no answer. She rang the local

She rang the local authorities and got an answering machine. She left a hurried message, “ This is Helena Eskildson from the University of Wisconsin, in coordination with the Denmark Association of Archaeological research. We have an intruder at our site: white male, long blonde hair, mustache. He is on the premises now. I’m going in.”

It wasn’t the smartest thing she could do by any means. It would be best to wait for some of the guys, or the officials but she was ticked. This was her dream project, discovering a site that had to do with her family’s heritage.

She stomped over the clumpy grass to the entrance of the tunnel, shining her light down the tunnel as she squatted down. “Hey. I know you’re in there. Come on out now.” She waited for a few minutes with no response.

She said a little louder “Hey! I know you can hear me in there. I saw you on the monitors. This is a closed site. You need to get out of there now.”

She waited. ‘Right! He just had to be difficult.’ Helena stepped down into the tunnel, her flashlight in her hand, cautiously moving forward. She passed the first set of aged timbers supporting the tunnel. Flashing the light behind her, then back in front of her she eased forward slowly. Her foot caught on a stone in the floor and she tumbled headlong down the incline, ramming her hand into the next set of timbers.

“Ow! Ow! “ She groped on the floor for her flashlight that had fallen out of her hand. There was a large cut on the back of her hand, blood trickling down. Two of her nails had been broken, and the skin just above her cuticles had been scraped, blood welling in the spots. She stood, placing her hand against the tunnel walls for support. She took two cautious steps forward and her flashlight died. No matter how hard she beat the thing it wouldn’t work. She clicked it on and off, but nothing. “Of course!”

Easing forward even slower in the dark, she felt along the damp, cold wall of the tunnel. Her hand hit the next timber support, and it moved. As it shifted, a huge chunk of dirt fell from the ceiling, along with the sodded grass from above. A few meager rays of bright moonlight filtered in showing her clearly the stone wall less than five feet in front of her. ‘Where did he go? She hadn’t passed him. Maybe he ran out before she had arrived. That would be about her luck.’

She glanced around, seeing nothing but the wall, and turned to leave. As she did, she lost her footing in the dirt and clumps of grass and tumbled back toward the wall. Frantic she turned to catch herself, landing palms first on the stone wall. Only it disappeared and she fell through it, landing at the feet of the intruder.

You can skate on over to VL Locey’s sinful pleasures  with hot hockey players on and off the ice at VLLOCEY and then skip on over to Cathy’s Romance, where you can find your next book boyfriend, then check out Author Misty Harvey‘s latest!