Have you ever had those days (weeks) when life is a whirlwind that leaves you dizzy and unable to recall exactly what you’ve done?

Last week I shared what I’ve been up to. Aside from admitting my lack of cake decorating skills for the Han Solo cake,  it was all about the office space.

I have a confession to make. Well, two actually.

The ZenDen  is still  going to happen,  unfortunately  though I have hit a snag.  A snag in the form of a time crunch. My plan was to get everything completed downstairs and then move stuff. After several days of clearing, moving, bagging, tossing, head shaking, fighting off the overwhelmed panic, my back  said that  it had enough. I’ve scheduled a visit to the chiropractor out of my normal sequence,  but it isn’t for another few days. 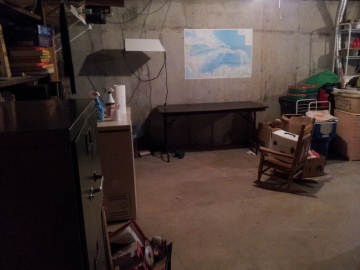 Wait,  I did move a couple of those boxes out of the area. The one in the foreground,  the ones on the little rocking chair, and  the box in the wire frame cart. Also, 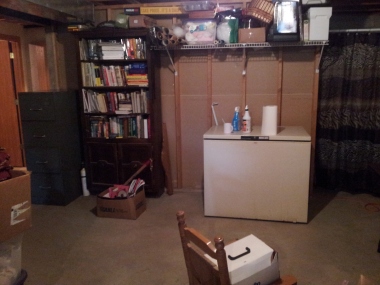 all of those books have been moved, as well as the stuff on top of the shelf.

That’s the point when my back said, Whoa Nelly! This was about the same time that the hubs and I had a discussion about the area.   You see, I get these ideas, I get excited, and I’ m off and running. I worked up my color scheme,  decided on the flooring that I wanted,  had my little floor plan designed. It was all good!

It doesn’t show up well on this photo, but the main color  is this Bermuda Bay  (It says Big Surf on the photo, but I found the exact color I want and it’s called Bermuda Bay – a different brand) on the left. The sand color on the bottom will be the wall where the  map of the Caribbean is currently. The navy blue and red in the sails will be accent colors as will the black and of course, sail white.   He looked at me with  an expression that said,  Have you lost your mind?

Look, I know  not everyone will get my color scheme. I know not everyone would choose this.  It’s my space – my office/craft room/private retreat. I selected my flooring choice, a plank vinyl that will go down right over the concrete floor. It looks like gray weathered wood, kind of a cross between the weathered pier and driftwood. I thought it was perfect.

My husband? Not so much.

Then there were the light fixtures. I found one that was perfect. It looked like something that would be on the Nautilus. Then I looked at the price.  Ummmmm, no.  I will need 4 lights after evaluating the area. I thought we could do two but I think 4 would be better.

Then we had a disagreement about  the dimensions of the space I was carving out.  He had  in mind something along a 5′ x 5′ space.  I don’t think so. I was livid.

After several minutes of discussing function and space issues, he  realized that I was including my craft stuff which is currently located on the other end of the basement.  We came to some semblance of an agreement. My dimensions are more along the lines of 14′ x 8′.  By then I was  tired and we needed to address our daughter’s room.

Most of my notebooks, pens, files, and all office related items were in her room on the writing desk that I was planning to use. My  belongings are now in a box . . . in the basement . . .   along with the rest of the  stuff down there. This evening  vacuuming, stripping the bed, and cleaning out the closet are the  items on my checklist.

I need to take some more items to our resale booth, but  getting her room in a welcoming state has to come first. If you want  to check out my previous posts on this, read –

Once we get this addressed, my attention will return to my office. Then I can begin organizing and clearing out the years of accumulated stuff. I have to admit, at this point minimalism looks pretty appealing.

Yes, we really do suffer from stuffitis. It can be paralyzing. It is also stifling. There is a psychology to clutter, and it’s not pretty.

If you want  to check out my previous posts on this, read – Space Revisions and Personal Space,  about creating my own zen den, my home office/craft studio/retreat/paradise.

By the way, the kitty litter thing is working. The musty smell has diminished in the basement. We’ve also increased the intervals at which the dehumidifier runs. The decor theme and reveal will be postponed, sorry.

My oldest daughter announced to the world that she is not planning to return to college after her junior year by posting a picture of her first tattoo, a compass to signify the new direction of her life. I have misgivings about this new direction. But, she’s 21 and has to make her own decisions. (This is the one that is moving back home.)

These were her words: “As a symbol of my changing courses in life, I got my first tattoo today. It’s a compass that will be a constant reminder of where I’ve been, and where I’m going. Even if I’m not sure where that may be.”

I still have a ton of work to do before we  make the drive to  get her on Thursday. 2 days. 47.23 hours from now.  25 of those hours are already scheduled. I suppose if I forfeit sleep I could get it all done. If I did, then I would  be in a foul mood akin to a badger. Bear would be too kind.  It is what it is.

On the bright side, I have  8 topics on which I can blog about – all briefly mentioned in this post. Those should serve for inspirational fodder for a while. You know,  just in case my well runs dry sometime in the year 2024.