Forgive me, readers, it’s been weeks since my last confession. I mean blog post. Well, sometimes they are about the same thing.

At the beginning of each year, I make plans.  Often, big plans! One of those plans was to get back to regularly posting. If I could figure out how to get onto my blog from my tablet, it would speed things up tremendously. Sometimes I am technically inept. I’ll figure it out eventually.

My husband is an IT guy. A code monkey. Name the electronics, he masters it. He writes in SQL all day at work. I was lost back in the day when I had to use Fortran and Cobol. Yes, I’m showing my age but oh well.

Until I have the time, (*cackles hysterically* time,  as in extra time – a delusional thought that most authors fantasize about) I’ll keep coming back to the laptop to enter my posts. Now that I’ve met my deadline for the anthology, I can return to a more manageable writing schedule.  Well, more manageable for me anyway.

My friend Vicki Locey is like a writing machine. She doesn’t use any dictation aids,  she just plugs away every day at her writing while managing a small farm. I don’t know how she does it. Other author friends have to juggle their home life, some with jobs whether part time or full time outside the home and still manage to crank out the books.

OK, a year ago I would have been stressed to the max over that,  but not anymore.  It is what it is and if nothing else, I’ve learned over the past year that I have to put blinders on to what “Other authors” do and DO what I can do. PERIOD! So, let’s do a little catch-up, shall we? Since I’ve been in absentia, maybe one or two of you have wondered where I disappeared. You did, right? Right?

January I had big plans! Some, I realize are on the dream level because if you never aim for the stars, you won’t ever clear the trees. I was super focused on decluttering our home and preparing to move closer to my husband’s work. We did great on that,  taking several carloads full of plunder to Goodwill. The estimated dollar value for all of the stuff we removed from our home –  $3500. Yes,  you read that right. Between clothing, (mostly mine in larger sizes that I am proud to say no longer fit!) furniture, small appliances, children’s toys that somehow got stored in a corner of the basement, and a plethora of knick-knacks. I should mention that our kids are adults now. I was shocked to find that we still had toys from their grade school years.

Just a word of advice –  if you are planning to make donations to a charity,   if you limit the donation amount to under $500, you are less likely to be audited.  We wrote off most of the stuff because I doubt that we are going to be able to itemize anyway.

The house was looking better,  after each purge we let the dust settle,  literally. Had to give a day or two between sessions because the dust aggravated the sinuses. Then we found the shop vac –  and began to be more proactive.

One shocking bit of purge –  books.  I know, I know,  y’all are shocked. I got rid of over 100 books. A few of those were my books from college, my husband’s books from college, reference books, and many old novels. I kept my first edition copies, despite the hubs protests.

February – decluttering continued but I was more focused on writing.  Value of things hauled out of our home to Goodwill or set on the curb with a sign  – FREE estimated at $2600.  (Not that I’m bragging if anything it’s embarrassing to admit how much stuff I didn’t need that I purchased with retail therapy over the years.) I had two anthology submissions to have in by the beginning of April.  The doctor appointments,  weekly therapy for lymphedema and aquasize classes kept me more than busy and by the time I got home from the aquacise classes and the therapy, I was drained.  My stamina is greatly improved since radiation treatments,  but I’m still not there yet.Fatigue is a very real issue.

I spent the majority of the month writing The Blood Key for the 12 Realms Fantasy Anthology while I worked out a plot line for my short novella for the Cancer Research anthology. Then I went gangbusters on that one. More about this in a bit.

March – this is where the train comes to a screeching halt while our lives are derailed. Things were going well.  We were making progress on the house. We could start renovations mid-March if we kept going at the same pace.

March 12 – 16, our oldest daughter was home for Spring Break. She didn’t get to go to Ft. Lauderdale or anywhere cool because she had doctors appointments, dentist appointments, and had to get her regular scheduled auto work done. While home she told us her big plans for the following school year, which were quite frankly ridiculous.  Her plans were to move back in with us and commute every day. Now, that may not sound like a problem except that the commute would be an hour and forty minute drive one way, every day, to and from.  That’s three hours on the road on a highway that semis use regularly. Sometimes she works late hours.

Being a mom,  I was terrified!  What if the semis push her little car around and she has an accident? What if she is so tired that she falls asleep driving?  What if she starts skipping classes because she’s tired of driving?????

The following week I spent a day researching available apartments in Cape.  I set up appointments for the next day when she would be available to go see them.  We viewed 14  apartments in about four hours. They ranged from roach motel to the Bates Motel, to meh, to College Life Resort center. Obviously, we didn’t want her to be in the roach motel, and we couldn’t swing the Resort.

So, our plans for renovations are on hold for a while so that we can help her finish to get her degree. Our plans to move closer to his work are on hold because, . . .  well,  moving costs money. There are closing costs, moving expenses and we have decided that our daughter’s safety is more important.

This put a big kink in the writing for a few days, so then I was back at it like gangbusters when I got news that the 12 Realms Fantasy anthology was canceled. SIGH

I’ll take The Blood Key and work on it some more,  develop it more. 15,000 words were limiting, I was just getting warmed up at 10,000! Now I can put in some of those scenes I had in my mind. It will have to be worked into the schedule for writing though as it’s been pushed from top priority to about fifth down the pipeline.

Now the good news! Break Line is complete! Cover Reveal for the anthology, next week! 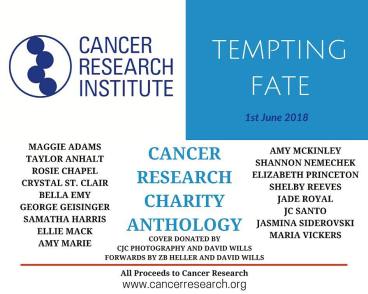 I thought things were getting back on track and then . . .  hospital. People need to stop getting sick and hurting themselves! I’ve been to the hospital more times than I can count over the past few weeks.

Life always throws you a curve ball when things are going smooth, and sometimes the ball machine goes haywire and throws out multiple balls when you’re already under the gun!

For now, things are calm and I’m back to writing or rather revisions. Valkyrie’s Curse has been on my desk for a while, a couple of years. In 2016, I did revisions on it and realized that it wasn’t a complete story. Back to the drawing board. Valkyrie’s Curse: The Awakening is in revisions again. This time I’m checking my grammar before sending it off to my alpha. The release date for this one will be in a couple months,  I’ll have more of a set date next week.

So, now you know what I’ve been up to. There was a funeral,  sickness,  and dealing with anxiety all thrown in the mix as well. More about the anxiety at a later post but for now,  I need to get a couple more chapters done for today.

What’s going on in your neck of the woods?

Thanks for stopping by! Write on my friends, write on!

2 comments on “What’s Going on In Your Neck of the Woods?”